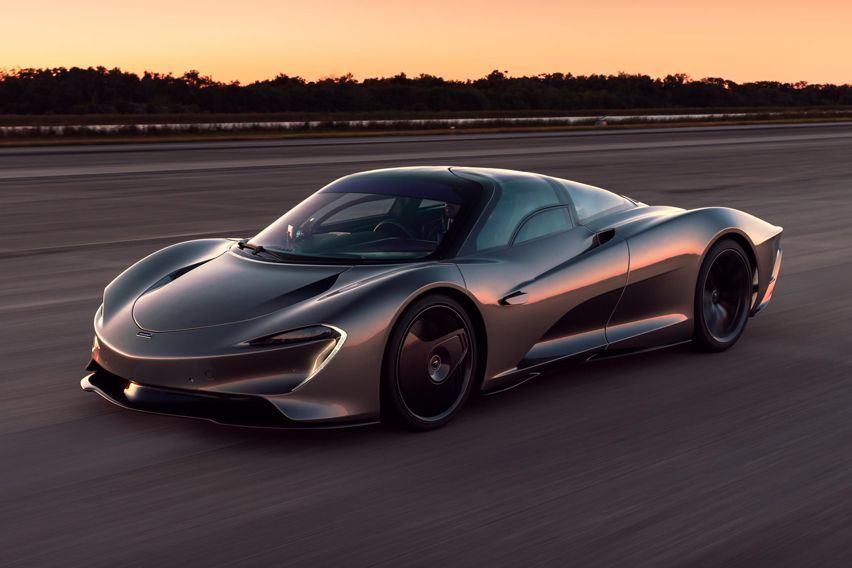 What was once a rare club, the 400km per hour club is no more a dream now. The improvement in science around automobiles has led the enthusiast manufacturer’s around the globe to develop more of these machines every year. The competition has forced the industries to come up with their best.

Ever wondered which out of the best is the best in this compelling segment? Come, let’s take a look at the top 10 fastest production cars in the world.

Maxes out at 403km per hour
The McLaren SpeedTail has been the successor of F1 and was first unveiled in 2018. Priced at USD 2.2 million (SGD 3.3 million), the SpeedTail is powered by a petrol-electric hybrid powertrain that comprises of a twin-turbocharged 4.0L V8 engine that is mated to electric motors, giving out a maximum power output of 1055PS besides a peak torque of 1150Nm. The carbon fibre body of the car helps it in achieving the 403kmph feat.

Maxes out at 400km per hour
The Koenigsegg Gemera is one of the most recent introductions to the world of speedsters. Limited to just 300 units, this 4 seater GT is a true mark of performance at the price tag of 1.7 million. The vehicle is powered by a 2.0L three-cylinder twin-turbo petrol engine runs in sync and three electric motors to give 1700hp of power. A major USP of the vehicle is its technology that generates power from fuel combinations like ethanol, CO2 neutral methanol and normal fuel. Lastly, the car maxes out at a top speed of 400kmph.

Maxes out at 407km per hour
The car that gave way to the supercar club, the Bugatti Veyron was the first speedster to make its way on the global stage, back in 2005. Limited to some 178 units in its run, the Veryon generated its power from an 8.0L W-16 engine. The powertrain used to give out a total power output of 987hp of maximum power besides 1250Nm of peak torque. The car would tap out at 407kmph top speed and be listed at 1.7 Million.

Maxes out at 435km per hour
The Hennessey Venom GT is a Texas based automobile that made its debut into the elite hypercar club in 2011. While this hand-built vehicle was limited to mere 17 units, the vehicle had received quite a limelight at the time of its arrival. The vehicle generates its power from a 7.0-litre twin-turbo V8 engine that was capable of generating 1226hp of power. The top speed of the vehicle was ranged at 435kmph.

Maxes out at 413km per hour
This car was the second in the list of fastest production supercar. The SSC Ultimate Aero is powered by a 6.3L twin-turbocharged V8 engine, producing 1170hp of power. Limited to 24 units, the vehicle would max out at 413kmph.

Maxes out at 420km per hour
The successor of Version, Chiron is powered by the same engine but produces a refined power output at 1480hp of power. Interestingly, the vehicle is said to be more powerful than that but is limited to the speed due to safety concerns.

Maxes out at 400km per hour
Limited to nine units, the Koenigsegg CCXR is a very aggressive sports car that is powered by a 4.7L twin-supercharged V8 engine adapted from the CCX. The vehicle generates 1000hp of power besides giving out a torque output of 1060Nm when provided with E85 or E100 ethanol fuel.

Maxes out at 431km per hour
The second make by Ducatti and the third member of the elite club, the Bugatti Veyron Super Sport carried similar underpinnings from its predecessor. However, the vehicle generated refined power output at 1182hp of power, maxing out at 431kmph.

Maxes out at 445km per hour
Officially the fastest production supercar limited to 25 units till 2019, the Koenigsegg Agera RS is powered by a 5.0L twin-turbo V8 to give out 1,350hp of power. It maxed out at 445kmph.

Maxes out at 490.48km per hour
The meanest machine on the planet, the Bugatti Chiron Super Sport 300+ runs on a finetuned engine from its predecessor. The engine is effective in giving out a top speed of 490.48kmph.